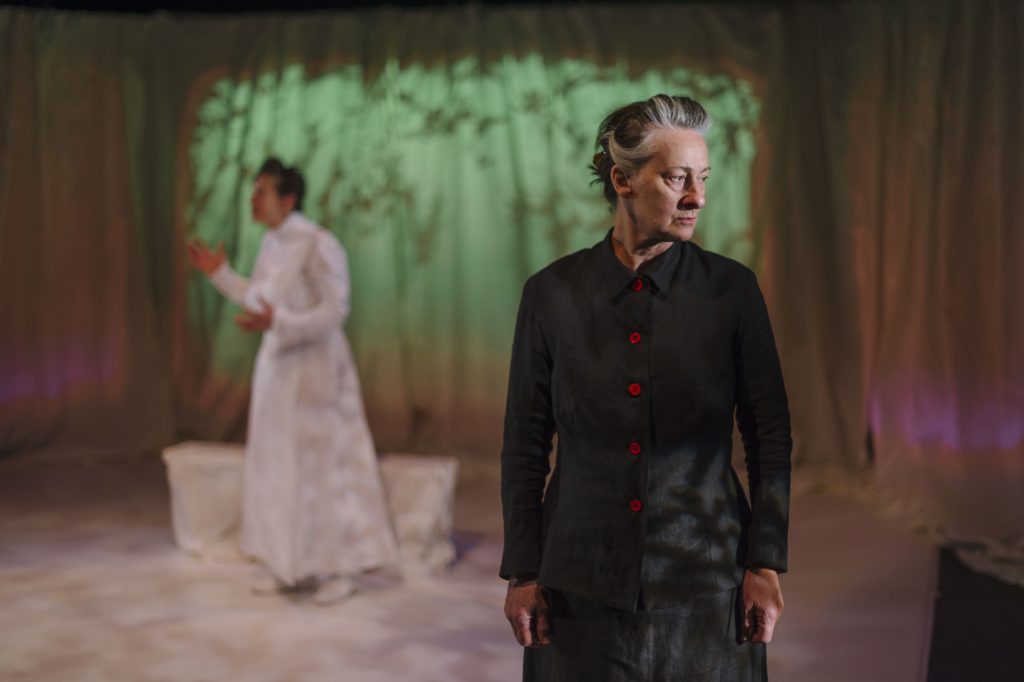 Creative Team for The Cause:

Josie Sutcliffe: Director/Dramaturg & Co-Director of Dreadnought South West. With many years experience of working in the arts in the UK and internationally. Josie trained with members of Brecht’s theatre in Berlin & taught Brecht’s methodologies for INSET at The National Theatre. Head of Theatre at Dartington College of Arts: 1997-2003. As a Director & Dramaturg in the professional theatre in the UK she has worked; Theatre Clwyd, Derby Playhouse, Chichester Festival Theatre, Theatre Royal, Stratford East & Plymouth Theatre Royal. Josie directed ‘Oxygen’, in 2013.

Michelle Ridings: a graduate of Dartington College of Arts, theatre maker, performer, & vocal coach. She has co-created a variety of productions of street theatre, processional performance, new circus & cabaret both in the UK and in Europe. Playing mainly on the fringes & at festivals, involved in environmental & social activism, using the tools of theatre to raise awareness of issues. Michelle is continuing the development of her solo work “Wicked Old Sod”. Performer in Dreadnought’s 2013 tour of ‘Oxygen’.

Remi Oriogun-Williams: most recently has co-written & acted in short films for feminist production company Sisters on Set. Previously she has performed & devised with Angel Exit theatre company & performed in the first UK production of Ezra Pound’s translation of Elektra. Remi is a London based actor who grew up in Dorset. She studied physical theatre at the Stockholm University of the Arts.

Sarah Moody: has worked for over 20 years as a musician with companies such as Kneehigh, London Bubble & Wildworks. She has written music for BBC Radio dramas & theatre companies such asTravelling Light, the egg, Bath, Open Attic, Stuff & Nonsense. She co-founded The Devil’s Violin, a critically acclaimed storytelling & music company that tours performances throughout the UK & Europe. Sarah plays cello with The Bristol Ceilidh Quartet & The Andrew Christie Quartet.

Diana Theodores: trained with the visionaries of the American Modern Dance, Martha Graham, Jose Limon, Anna Sokolow & Merce Cunningham. She has worked with many inspirational artists in theatre & dance over the years & has staged works at the Abbey Theatre, the Gate Theatre, the Royal Court & others. From 1993-2003 Diana was Reader in Theatre & Choreography at Dartington College in Devon, where she led numerous choreographic research & practice projects including the pioneering, Conversations in Choreography project. She is the author of First We Take Manhattan: Four American Women and the New York School of Dance.

Catherine Cartwright: is a visual artist, working primarily with printmaking, drawing & film, often exploring socio-political issues. She exhibits regionally & internationally; most recently in 2017 in the Animation & Printing exhibition at New York’s Center for the Book,   the Masters: One-Off at the Bankside Gallery, London. Currently doing a Masters in Multidisciplinary Printmaking at the University of West of England, where she is researching the interface of printmaking & animation. She is a director with Double Elephant Print Workshop.

Gillian Taylor: A communications consultant for arts, culture & heritage. Works with organisations & individuals to raise their profile through media relations, digital marketing, audience development & advocacy. Before setting up her freelance consultancy in 2013, Gillian was the Communications Lead for ACE, South West. She works with RAMM, CEDA, extreme imagination festival & the All Party Parliamentary Group for Arts, Health & Wellbeing.

Belinda Chapman: works as a Performer and Movement Director. She has performed & devised leading roles for Matthew Bourne’s New Adventures company & is a fellow of The Arts Foundation as a Creator of theatre for young people. Movement direction includes; Girl With The Iron Claws (Dartington); Monkey! (Uk Tour); War Torn (Theatre Royal Plymouth).

Nicci Wonnacott: Nicci is interested in curating ethereal spaces, her interest in white is a metaphor used as a thin white line between world’s. Nicci’s work transcends through her body & space, theatrical & public. As a performance artist Nicci uses herself as the work, she promotes her political ideology & activism. A multi media artist & designer Wonnacott describes her self as an obsessive creative, always questioning.

StS: Production: StS have been involved with The Cause from the early days. Based in Exeter, the core team of four have a wealth of experience in providing production management & technical support, including lighting & sound design. They pride themselves on high production values & attention to detail no matter how large or small the show & enjoy working collaboratively with companies. Recent work; technical support, for The Bike Shed Theatre, the Paul Taylor Mills Sidmouth Summer Play Festival, production management for Southbank Centre’s WOW Exeter Festival.

Mary Culhane: Marketing & Audience Development. After working as a TV director in Manchester, she moved to Devon 5 years ago with her partner & two young daughters. She has spent an enjoyable 15 months volunteering at The Bike Shed & working as a freelance blog & social media content writer. Mary has also been involved in setting up a local community bread-baking group & has formed a Red Tent group in Exmouth.

Nia Gould: Designer. Creative Design Manager for Exeter Phoenix, with over 10 years worth of experience in graphic design & illustration. Graduating from Falmouth University in 2008 with a First Class degree, she has gone on to work for many clients both locally & internationally, with a main focus in print design and typography. As well as working as a freelance designer from her home designing cards, prints, tote bags & enamel pins that sell all over the world. Her work has been displayed in a number of gallery exhibitions.

Catherine Hall: After training & working in Business & Transport management, Catherine took a completely different career path to study for NVQ BSL levels 1 to 3, she then completed her interpreter training at UCLAN on the postgrad diploma course becoming a registered BSL/English interpreter. She has a passion for theatre interpreting & has interpreted theatre performances for Unleashed Theatre & Exeter Northcott. An interpreter at WOWExeter last year.

We help you get online payday loans on https://kloponlinepaydayloans.com/