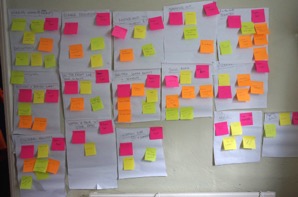 After months of planning and curation we finally had our 16 hours of radio broadcasting to celebrate International Women’s Day 2017.

It was a big shift from 2016’s pilot, where we had 6 hours on air and a much smaller gathering of women hosting shows. Nonetheless it worked and brought about a huge amount of joy and pride to those of us involved.

So we decided to see if we could do it again, and thanks to Phonic FM we were. All the regular DJ’s gave up their weekly slots to enable this to happen so many thanks to them, with Dave Treharne and John Wigzall (Director’s of Phonic) (and Pat who did the desk training) supporting us all the way.

This year thanks to funding from Arts Council England South West, Exeter City Council and Fawcett Devon we were able to make that leap into the unknown, including offering in the run up to the event itself free training for women in Podcasting and how to run the desk in Phonic’s studio. This was very exciting indeed as we hoped that it would inspire those who took up the training to continue engaging with radio and podcast production long after the event itself. There was also a session on producing a radio script to allow for structure and the do’s and don’ts whilst on air. You might be able to guess what some of those are. 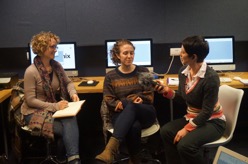 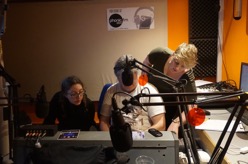 Some amazing podcasts were part of the day from Cathy Towers and Belinda Dillon talking to women running independent businesses in Fore Street in Exeter. Some of these will be put up on the website, and so will the podcasts made by Nicky Glassbrook. We look forward to sharing these with you all.

Our plan was to be on air from 8am until Midnight. And we were. Over 65 women and girls took part on air in some way in the end, and we were supported brilliantly all day by Exeter Phoenix who provided us with a green room so everyone involved could get a cup of tea and meet other guests or show hosts.

There was a wonderful community atmosphere throughout the day. So a big thank you to Patrick and his team at the Phoenix. The tea and coffee supplies helped us enormously! John Wigzall was also a great support technically throughout the day, as was Helen Connole who ran the desk for several shows. Josie Sutcliffe, Charlie Parker and Kerrie Seymour were there all day running the logistics and ensuring everything moved on schedule. It was a great celebration of women from across the city of Exeter. 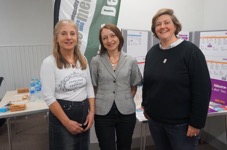 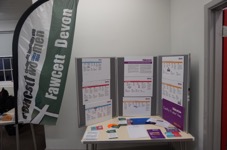 In the weeks leading up to Occupy the Airwaves, Sam Smether’s Chief Executive of the Fawcett Society was invited to speak at a Fawcett Devon event about the impact of leading the EU on women. Dreadnought had the opportunity to interview Sam before the event took place. The interview was broadcast during the Women and Activism show.

The interview will be made available in the Autumn on this website for you to listen in to. Thanks to Sam for taking the time to talk to us at Dreadnought South West. The above image is of Yvonne Atkinson (Fawcett Devon Co-ordinator), Sam Smether’s and Nat McGrath from Dreadnought. It was great to hear Sam talk and we thoroughly recommend it if you ever get the opportunity she is an eloquent and highly knowledgeable speaker, particularly on gender equality and women’s rights.

Josie and Charlie were instrumental in the programming of the day with Kerrie Seymour and between the three of them they were able to plot the day.

This included Inspiring Women’s Day. Kicked off by Josie Sutcliffe with Nina Simone’s version of ‘Feelin’ Good’, to start Dreadnought’s 16 hour occupation of Phonic.FM. Joined by Charlie Parker and Kerrie Seymour, who then went off to set up the Green Room for the day, and Belinda Dillon who stayed as a guest for the rest of this launch show. Val Wilson from Exeter City Council joining towards the end.

Shows included subject such as Female Friendship and collaborations hosted by Kerrie, Motherhood which created a manifesto for being a mother, and Speaking Out, hosted by Cathy Towers, which included some fantastic podcasts of interviews with a range of women about how they have spoken up and out. This was very inspiring. Women In the Arts and Women and Activism was hosted by Josie Sutcliffe, her third show of the day!

Nicci Wonnacott did a spoken word performance of her piece ‘Mouth’, which was exciting and political. On the Front Line: Women in Tech & Science, hosted by Helen Connole with Felicity Liggins from the Met Office was great in sharing stories about women in tech and quite a few experiments took place in the green room.

In Gender, Identity, Sexuality, in Museums & Heritage, hosted by Nat McGrath, there were two fascinating recorded interviews with Dr Jana Funke from the Institute of Sexology at the University of Exeter and Trans Activist and Historian Cheryl Morgan. Really looking forward to hearing these again, and the discussions between Dr Ina Linge, Terah Walkup and Dr Jen Grove.

It’s A Girl Thing, another show hosted by Kerrie Seymour later on had younger women on the show and then as we hit teatime Sharifa took on Advocay with guests and then Cultural Identity, amidst some fantastic tracks by women. Where is Home? Hosted by Emily Souter-Johnson came next exploring notions of identity and where we belong. Then a comedy hour ensued with The Two Yonis aka Nicky Glassbrook & Michelle Ridings, considering how the menopause has impacted on their lives and behaviours.

Finally we hit our last stride with Women Are the New Punk Rock hosted by Lande Hekt, with guests and amazing conversations and music about women and DIY punk culture. It was a great way to end the longer shows, with music by women and the content ranging from being a younger women to periods.

Finishing with The Party’s (not) Over, hosted by Josie Sutcliffe and Nat McGrath with the team: Charlie Parker, Kerrie Seymour and Belinda Dillon. It was such an exciting and rewarding day. Finally got that Beyonce track in! 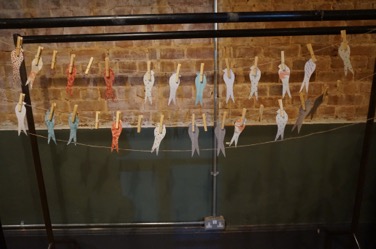 Dreadnought Associate Artist Catherine Cartwright beamed in all the way from Australia during the day and sent us a beautiful print image from her collection of new work. It was amazing to here from Cath on the day. We know that there were folk listening in from the US, Norfolk, Essex, Northampton, Cornwall and other parts of the UK.

A massive thank you to everyone who hosted a programme, ran the desk, made podcasts, was a guest, chose great tunes by women, gave an interview to be recorded in advance. Thank you for your time and effort in making this event work.

Big thanks to Charlie Parker, Kerrie Seymour, Belinda Dillon who were there all day, as was Josie Sutcliffe with Natalie joining later on in the morning. AND to our Trustees who supported the event and continue to support our ongoing work and commitment to sharing stories about women and girls, and making their voices heard. The radio, we have discovered is a great way to do this.

We hope very much to be back next year on March 8th 2018, but in the meantime if you read this and think you would like to be involved then please do get in touch with us here: info.dreadnoughtsw@gmail.com

Posted in Occupy The Airwaves 2017