It was amazing to be at Dartington for a week to work through final rehearsals and to undertake the final creative build of the show and its technical elements. Great to have all the company together that week including our MD Sarah Moody and Costume Designer Beth De Tisi who could be seen making as the tech runs were happening. Catherine Cartwright and Gillian Taylor were also with us for some of the week, and a thanks to Jim Wileman who came and took photographs of the show.

The music and sound has really woven a spell around the production and is utterly enchanting to listen too. The projections are coming alive and bringing a new depth to the overall production and what we see visually.

StS team were with us too all week enabling the build of the show technically and visually so a big thanks to Amy, Elaine, Jamie and Will for all their work and being with us on this epic journey.

A massive thank you to Dartington Live and Becca Gill for enabling this. It was a fantastic week and The Cause benefitted enormously from it and will continue to do so across the touring schedules. 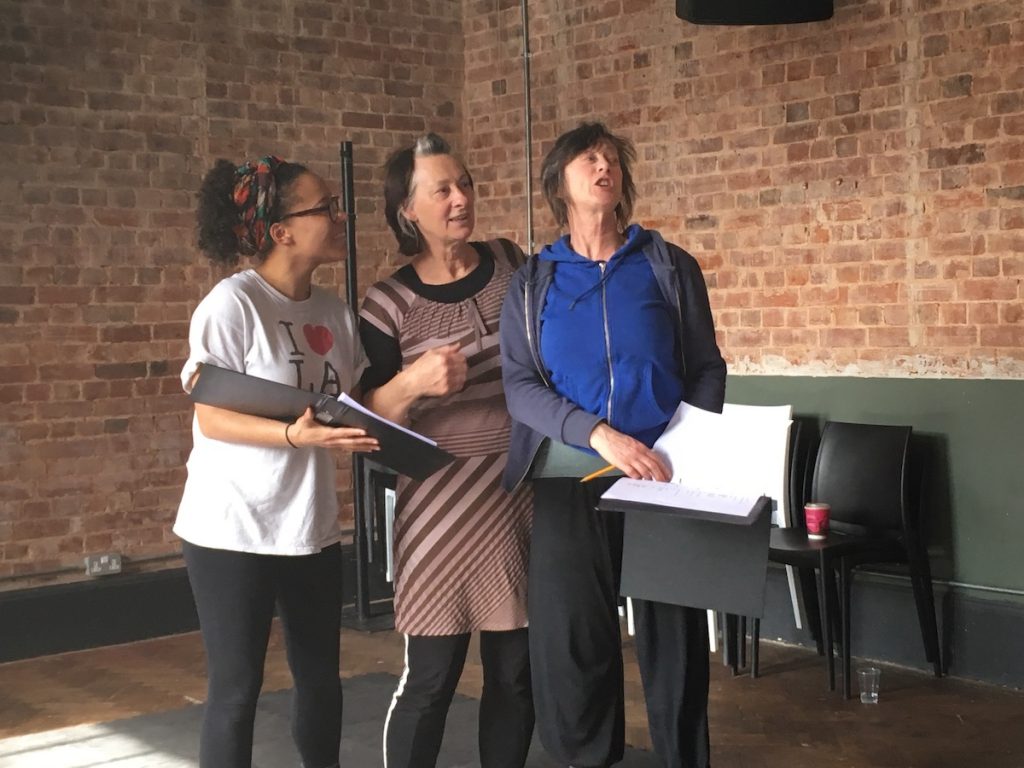 We asked Catherine Cartwright to answer some questions about her process and work on The Cause. This is what she had to say:

How is working on a new play/production different from what you have done before as an artist?
I have collaborated with other artists and art forms before in filmmaking, with dance artists and with other visual artists. But this is collaboration on another scale. To be part of a creative team that spans music, costume, movement, as well as of course, the written words themselves, is hugely exciting. I really enjoy seeing the other creatives in action – to see the actors in rehearsal, the music director composing and the choreographer working with the actors. I love being part of a team creating a new production – where the themes echo my own individual art practice and on issues that I’m fascinated by – how does social change happen and what forms can activism take. To work with Dreadnought SW is to work with an organisation that embodies these questions both in their methods, in their work with their communities, and in the production and play itself.

Can you describe your creative process?
For “The Cause” I have made six moving image pieces. They are not films and they are not illustrative, exactly. They mean to echo, suggest, vibrate symbolism and emotional energies through the play. I have used an animation process called rotoscoping whereby I map the movements from original film footage, and I’ve done this with monotype drawing. Monotypes are made by drawing onto a very thin layer of printmaking ink through paper – this results in characteristically fuzzy lines. I am a multidisciplinary printmaker which means printmaking processes are at the heart of my work but that I often use other art forms such as moving image and stitch as part of the work I make.

The Cause in Rehearsal – The Story So Far

We started on a day with snow still hanging around in the air in the morning. By lunchtime most of it had gone in Exeter, but not the surrounding areas so we missed having the whole creative and tech team with us on that first day. Nonetheless we did start and now it is almost three weeks later, it is hard to remember all the detail of that very first day. Gathering at Exeter Phoenix and as the snow melted different people arrived. The play was read in two bursts and it was exciting and revealing to hear it. I made loads of notes, didn’t stop scribbling on my script copy knowing there were discoveries being made. Hearing where there were too many words, feeling where there were not enough, or words that didn’t dig deep enough.

There was a lot of laughter on that first day. Those of us who had been with the play from the beginning of the development process felt a lot of joy at finally getting to this point. This was and continues to be a great source of warmth in the rehearsal room. The laughter had continued as new discoveries and connections get made.

Other members of the creative team like MD Sarah Moody excavate the text whilst searching for the possibility of sound. Where are the gaps or the moments that need a violin or the dulcimer or the cello to bring in notes that needed to be found. Where is silence the most effective sound is a question also being asked. The songs start to come to life.

Behind the scenes tour manager Kerrie Seymour is pushing to confirm the Spring and Summer touring schedule, whilst STS the technical team are working away making the things that need to happen, happen. Marketing and publicity get designed.

At the centre of it all is director Josie Sutcliffe holding it all together, still pushing me dramaturgically with the text and finding new notes that are astute, bringing new layers of meaning to the writing. To the work. As she gets the actors into the space and up on their feet. We have moved beyond the rehearsed reading stages now. Now there are new things to learn and I am still learning. We all are.

The actors; Ruth Mitchell, Michelle Ridings and Remi Oriogun-Williams work with movement with Belinda Chapman and Josie, finding ways of being in the playing space.  Letting go of expectations and playing with the text and their bodies. Working through the text through sound is also exciting adding another perspective to the lens of reading it and understanding it. Cuts get made. New words are found. Particularly for the Trumpet. The third character. The newest character to The Cause.